Our school just sent out the semi-annual come-find-your-kids’-stuff-because-it-has-been-waiting-here-in-our-garbage-room-aka-lost-and-found-for-three-months notice.

I hate searching through grubby, stinky clothes to find my son’s raincoat, which he has lost no fewer than 1000 times! Of course, it is a raincoat, so it spends more time lost than keeping him dry, because it is cooler to be stupid than warm and dry when you are 10.

In the end, it’s my fault really.

It is also my responsibility when he needs a raincoat to go horseback riding with our kind friend and (surprise, surprise) it’s raining in Vancouver. It’s also my fault when it’s not quite cold enough to wear a winter coat while skiing on the North Shore mountains, and layered with a fleece a raincoat is ideal, yet it is missing.

So, either by punishment or responsibility, it is my job to sift through the evidence of other parents’ tireless efforts. Like it or not.

This year our school cleverly took a humourous approach to cleaning house and called it the “Lost and Found Parade.” They even folded everything and laid it out like a craft sale. I couldn’t help but think about the Island of the Misfit Toys in the Christmas classic, Rudolph:

Me in the role of Charlie-in-the-Box:
“I’m the official sentry of the island of lost and found. My expectations are all wrong, no child has the wherewithal to track their own things, so I had to come here!”

It’s not hard to imagine an Island of lost mittens and socks, and if you’ve ever looked in a school’s lost and found, you’ll know that island must be big, and also diverse because you wouldn’t believe the things kids can lose.

The students have been walking past those tables for two weeks, yet it is the parents wandering through, perhaps without anything specific in mind, with waning hope that a forgotten relic will appear with their child’s name on it, hope for closure to yet another mysterious disappearance.

So, I joined my fellow, exasperated parents and strolled through the parade – more because I was enjoying the Charlie-in-the-box analogy than because I expected to find anything – when lo and behold, a grey raincoat appeared, yet again. I barely recognized it folded so neatly on the table like that, but sure enough Mabel’s trusty label confirmed it indeed belongs in our home in its rightful place: 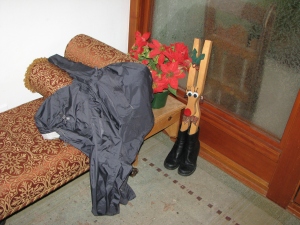 Strewn across the foyer bench with Rudolph standing by.

Oh, to be a kid again and NOT find peace of mind through a lost and found parade.

Follow me and check out my new blog! Meat Eating Vegans

Environmentalist Egalitarian Engineer Writer There, I finally said it. END_OF_DOCUMENT_TOKEN_TO_BE_REPLACED
This entry was posted on Friday, December 14th, 2012 at 12:40 pm and tagged with kids, parenting, raising children and posted in Kids, Parenting. You can follow any responses to this entry through the RSS 2.0 feed.
« 16. Noise (Part deux of my Car Series)
It’s not you, it’s me »

You have the floor Cancel reply